One of the most ambitious string bands to emerge in the early 21st century, the Punch Brothers built their sound on a platform of virtuosic instrumentalism and dazzling arrangements. Formed in the late 2000s after the dissolution of mandolinist Chris Thile’s former band, Nickel Creek, Punch Brothers’ amalgam of bluegrass energy, classical complexity, and jazzy improvisation was immediately apparent.

All but one of the band’s albums have topped the Billboard Bluegrass charts while also making the strong crossover into the pop, rock, and folk charts. A roots music supergroup, Punch Brothers made their debut at Carnegie Hall and were the subject of the 2011 documentary, “How to Grow a Band”. Their fifth album, 2018’s “All Ashore”, won the Grammy Award for Best Folk Album and they followed it in early 2022 with the tribute set “Hell on Church Street, “ a reimagining of bluegrass great Tony Rice’s landmark solo album.

Over the last four decades, Béla Fleck has made a point of boldly going where no banjo player has gone before, a musical journey that has earned him 15 Grammy Awards in nine different fields, including Country, Pop, Jazz, Instrumental, Classical and World Music. But his roots are in bluegrass, and that’s where he returns with his first bluegrass tour in 24 years, My Bluegrass Heart.

Through the long and lauded course of his unique creative run, Fleck – the world’s premier banjo virtuoso and a celebrated musical adventurer – has both dug deep into his instrument’s complex global history. My Bluegrass Heart is a homecoming in sound, to be sure.

“Béla Fleck has taken banjo playing to some very unlikely places — not just bluegrass and country and “newgrass,” but also into classical concertos, jazz and a documentary about the banjo’s deep African roots 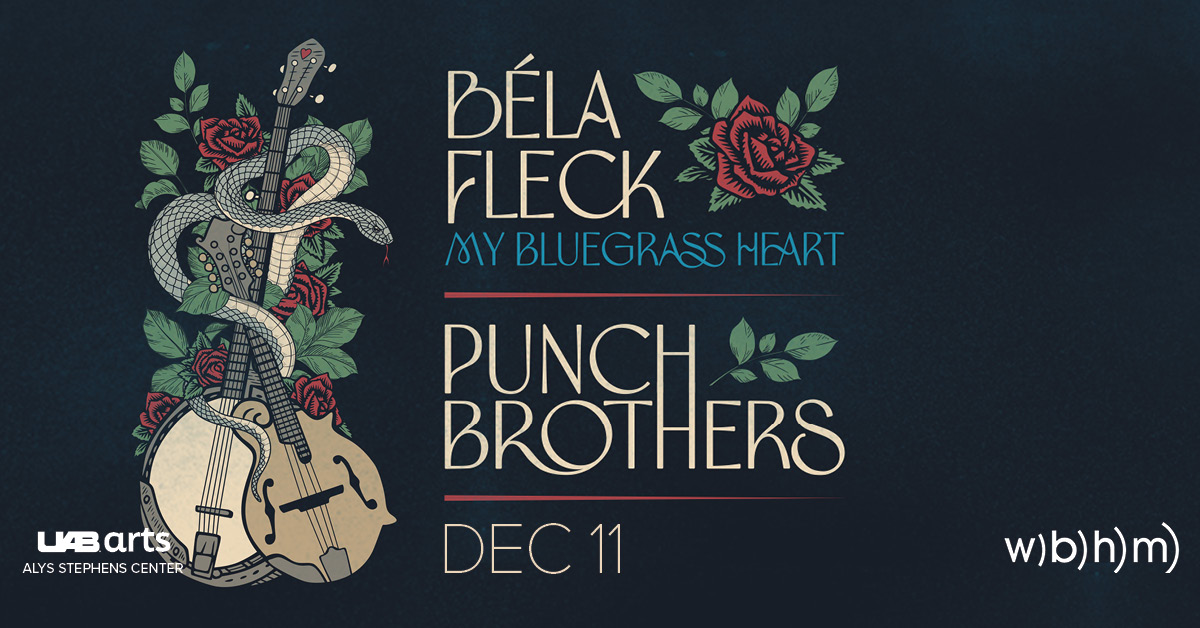 Located near the University of Alabama at Birmingham, University Hospital, Kirklin Clinic and the Central Business District, 10 guest rooms of impeccably high quality await you in our National Historic Registered 1898 mansion. 26 restaurants and att...

Book a room at the Econo Lodge hotel in Birmingham, AL.

The Elyton Hotel invites you to experience a new definition indulgence at the intersection of modern sophistication and rich tradition. This architectural and historical treasure enjoys an ideal location on the celebrated "Heaviest Corner on Earth" c...

The atmosphere at SAW’S Juke Joint is all about casual and friendly. Reclaimed wood paneling, bare bulbs and metal tables and chairs suitably make for a slightly industrial feel. But after all, this place means business – food and music.

Founded in 1937, Lloyd's is known for its casual setting and home-cooked meals.

The Club opened in Birmingham in 1951 and is still today one of the most unique private clubs in the South as well as the country. Three restaurant options are available from casual to elegant, but what The Club is most famously known for is its beau...

The Hot and Hot Fish Club is a place where the food rules and the casual elegance of the atmosphere welcomes everyone to simply relax and enjoy.

Half Shell Oyster House is a concept that was brought to life in 2009 in the historic Kremer building located in downtown Gulfport, Miss. The Half Shell since then has grown into 13 regional locations throughout Mississippi, Alabama and Louisiana. Ou...
Previous SlideNext Slide

We carry everything that has ever been made in one convenient shopping location!

Jim Reed Books and the Museum of Fond Memories

Arlington is the last standing antebellum home in the City of Birmingham. It is available for tours, weddings, receptions, luncheons, dinners, and garden parties.

Locked In: The Birmingham Escape Game

The Virginia Samford Theatre is located in the historic Southside district of Birmingham next to Caldwell Park.

Home to world's largest cast-iron statue. Enjoy panoramic views of Birmingham and hear stories of Birmingham's past, present and promise for the future.

1,000+-acre nature preserve. Geological formations, ore-mining heritage. Hiking trails and overlook. Visitor center with animal and mining exhibits, gift shop. Environmentally friendly family programs.
Previous SlideNext Slide
We use cookies on our website to enhance your experience. By continuing on our website, you consent to our use of cookies. Learn more in our Privacy Policy.