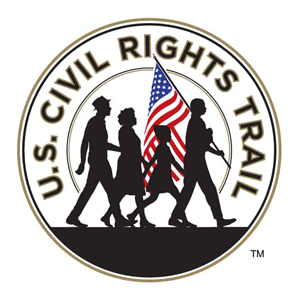 The U.S. Civil Rights Trail is a collection of churches, courthouses, schools, museums and other landmarks, primarily in the Southern states, where activists challenged segregation in the 1950s and 1960s to advance social justice.

Places where activists successfully sought equal access to public education, public transportation and voting rights comprise many of the locations grouped under the theme “What happened here changed the world.”

Schools stretching from Topeka, Kansas, and Little Rock, Arkansas, to Farmville, Virginia, and South Carolina represent the end of racial segregation in public education, triggered by the landmark 1954 Brown v. Board of Education court decision. Several museums are operated by the National Park Service. The Brown decision would be used by future courts to dismantle other forms of legal segregation.

F.W. Woolworth lunch counters in Greensboro, North Carolina, and Nashville, Tennessee, where sit-ins by black college students in 1960 inspired a wave of similar nonviolent demonstrations, are featured on the trail. The Greensboro store is a major civil rights museum, and the Tennessee building is repurposed as a restaurant and entertainment venue that attracts civil-rights pilgrims.

Most blacks in Deep South states were prevented from registering to vote. A voting-rights march in Selma, Alabama, that turned violent on the Edmund Pettus Bridge emboldened Congress to pass the 1965 Voting Rights Act. Visitors now walk across the bridge daily.

Dr. Martin Luther King Jr., the most visible leader of the movement, is represented in several states.His birthplace and gravesite are just steps apart in downtown Atlanta. His first church in Montgomery, Alabama, is where he led the successful bus boycott after the arrest of Rosa Parks. The Memphis church where he gave his “I’ve Been to the Mountaintop” speech the night before his assassination at the Lorraine Motel is a popular destination. The motel, expanded into the National Civil Rights Museum, is the most visited restored civil rights landmark in America. The Memphis museum will be the focus for the 50th anniversary of the death of Dr. King this year.

Four major museums were built to interpret the movement. U.S. Rep. John Lewis of Atlanta championed construction of the National Museum of African American History and Culture, which opened to great acclaim in Washington, D.C., in 2016. The Birmingham Civil Rights Institute, now the centerpiece of a new national monument, faces the park where police used fire hoses and dogs in 1963 to terrorize student demonstrators. The Center for Civil and Human Rights is a major attraction in downtown Atlanta. The Mississippi Civil Rights Museum, which opened in Jackson last month, is the newest.

For details of the dozens of sites and interviews with foot soldiers and tour guides at some of the landmarks, visit END_OF_DOCUMENT_TOKEN_TO_BE_REPLACED .