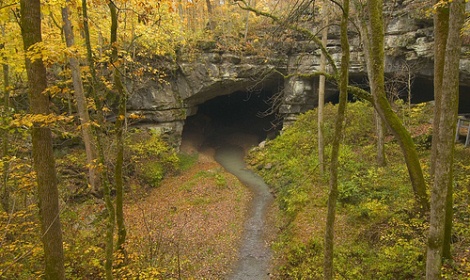 For thousands of years prior to white settlement, the place that is today called Alabama was home to many different culture groups of Native Americans. Semi-nomadic hunters of the Paleo-Indian culture used rock shelters along the Tennessee River, perhaps as early as 10,000 B.C. The Indians of the Archaic period that followed left shell mounds in many locations, and Gulf Formational culture artifacts have been found in both the Tennessee and Tombigbee river valleys. Russell Cave in northeastern Alabama contains one of the longest and most complete archaeological records in the eastern U.S.

More than 200 years before Spanish explorers brought the first wave of virulent European diseases to the Americas, the Mississippian culture had reached its zenith, around A.D. 1300. The most significant aspect of the Mississippian culture was mound building. Examples of these mounds are still found throughout Alabama today. The great temple complex at Moundville, on the banks of the Black Warrior River, was one of the most magnificent Mississippian ceremonial centers. It sprawled over 320 acres and included 26 mounds, the largest of which rose nearly 60 feet. The city of 3,000 people was surrounded by a mile-long wall that was nearly 12 feet high and studded with towers along its length. The society was based on corn and supported an extensive trade network throughout eastern North America. Artwork of exceptional beauty was created in stone, pottery, bone and copper.

The first documented encounter of Native Americans with whites in Alabama occurred in 1540 with Hernando de Soto's brutal entrada. More than 150 years later, the French established Alabama's first white settlement at 27-Mile Bluff north of present-day Mobile in 1702. They found a decimated Native American population, though some recovery had taken place since the drastic 16th century decline. The rise of the historic Native American tribes in Alabama had begun some 200 years before statehood and was associated with four major Indian nations: Cherokee, Creek, Choctaw and Chickasaw. During the 18th century, the native peoples of Alabama were caught in an ever-tightening vise as European powers – and near the century's end, the United States – struggled for control of North America. In the early 19th century, the volatile situation was marked by battles such as the Creek attacks on Fort Mims and Fort Sinquefield and the Battle of Horseshoe Bend.

By the end of 1838, nearly 50,000 Native Americans from across the Southeast had been deported west of the Mississippi. Some Choctaw, Creek and Cherokee Indians managed to remain in Alabama. Prior to his being exiled to the west, Creek Chief Eufaula, Yoholo-Micco, addressed the Alabama Legislature in 1836 at the State Capitol in Tuscaloosa: “In these lands of Alabama, which have belonged to my forefathers and where their bones lie buried, I see that the Indian fires are going out. Soon they will be cold – I leave the graves of my fathers, for the Indian fires are almost gone.”