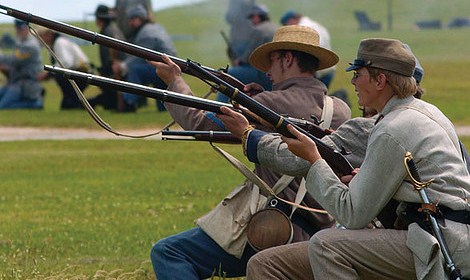 From the telegram ordering the first shot at Fort Sumter to the last major battle of the conflict, Alabamians played pivotal roles in America's Civil War and the shaping of the country as we know it today. In Marbury, Confederate Memorial Park is the site of Alabama's only state-operated Confederate veterans home, and the museum there showcases an extensive collection of uniforms, weapons and other memorabilia from Alabama's Confederate past. Along the coast, the Battle of Mobile Bay Civil War Trail spotlights Fort Morgan and historic Fort Gaines.

Many important Civil War battles were fought on Alabama soil, including the war's final major battle at Fort Blakeley. Nearly two dozen of these battles are reenacted annually in Alabama, including the Siege of Bridgeport, Battle of Selma, Campaign at Fort Morgan, Tannehill Skirmish, Fort Morgan Siege & Encampment and the Battles for the Armory in Tallassee.

In Montgomery, where the Confederate States of America was born in February 1861, you can stand on the spot where Jefferson Davis took the oath of office. You can also tour the restored State Capitol and visit the nearby First White House of the Confederacy and the Alabama Department of Archives & History.

Depot museums in Huntsville, Selma and Stevenson offer glimpses into the lives of Confederate and Union soldiers, and excellent examples of Civil War weaponry and equipment are on display at Anniston's Berman Museum, Decatur's Blue and Gray Museum and the Bessemer Hall of History. Visit Birmingham's Arlington, and see where Union commanders planned the 1865 march that led to the burning of the University of Alabama in Tuscaloosa.

END_OF_DOCUMENT_TOKEN_TO_BE_REPLACED

Cradle of the Confederacy Trail

1. Marion Military Institute
During the Civil War, Breckinridge Military Hospital was established on the campus of Marion Military Institute. Confederate soldiers who died at the hospital were buried behind the campus. After the war, their remains were exhumed and re-interred at St. Wilfrid's Cemetery. Also buried at St. Wilfrid's is William Brooks who served as president of Alabama's Secession Convention in January 1861.

2. Smitherman Historic Building
The building was used as a Confederate hospital and features the Lewis Collection of Civil War memorabilia.

4. Alabama State Capitol
Jefferson Davis was sworn in as President of the Confederate States of America on Feb. 18, 1861. A star on the Capitol steps marks the inauguration.

4. First White House of the Confederacy
1835 Italianate-style house was home to President and Mrs. Jefferson Davis while capital of Confederacy was in Montgomery. Home completely furnished with period pieces from 1850s and 1860.

4. Winter Building
On April 11, 1861, Confederate Secretary of War L.P. Walker sent the telegram from the second floor office of the Southern Telegraph Company in the Winter Building to Charleston, SC, authorizing Confederate Gen. Beauregard to fire on Fort Sumter. The bombardment of Fort Sumter the following day was the first military action of the Civil War.

6. Tallassee Confederate Armory
When the Confederacy feared for the security of Richmond, VA, a decision was made to relocate Richmond Carbine to an 1844 cotton mill in Tallassee. Only Confederate armory to survive the Civil War.

6. Tallassee Officers Quarters
When the Confederate Armory was moved to Tallassee in 1864, three homes were constructed by the Confederate government to house the officers in command. (Two of the three houses remain and they are now used as offices.)

7. Fort Tyler
Located on the Alabama-Georgia border, Fort Tyler was the site of one of the last Civil War battles (April 16, 1865) to take place east of Mississippi.

9. Union Springs Confederate Cemetery
The cemetery is the burial site of both Union and Confederate soldiers.

11. Newton Civil War Monument
Stone marker is reminder of the only Civil War action in Wiregrass area. It occurred in Skipperville in 1864, and Newton one month before the war ended in 1865.

2. Admiral Raphael Semmes House
Raphael Semmes moved to Alabama in 1842. When Alabama withdrew from the Union in 1861, Semmes resigned from the U.S. Navy and was commissioned a commander in the Confederate Navy. He was promoted to Captain and assumed command of the CSS Alabama. During its 22-month career as a commerce raider, the Alabama cruised for nearly 75,000 miles and captured 65 Union vessels worth more than $6 million. The Alabama was sunk off the coast of Cherbourg, France, on June 2, 1864, by the USS Kearsage.

2. The Museum of Mobile
Innovative exhibits come alive in this National Historic Landmark. Explore Mobile as the first Americans saw it. Relive the jouney of African-Americans. Sense the revelry of Mardi Gras. Get your hands on history.

3. Historic Blakeley State Park
Remains of earthen forts, old rifle pits, redoubts and battery sites dot the park's 3,800 acres. Following the fall of nearby Spanish Fort on the night of April 8, 1865, orders were issued to take Blakeley by assault. The general advance began at 5:25 p.m. on April 9, six hours after Lee surrendered at Appomattox. Fort Blakeley fell in the last battle of the Civil War.

2. Janney Furnace
Alfred A. Janney began construction of the iron furnace near Ohatchee in 1863. The furnace was still under construction when it was almost completely destroyed by Union troops commanded by General Rousseau in July 1864.

4. The Gallant Pelham Statue
The statue is located in the Jacksonville City Cemetery. John Pelham, born in nearby Alexandria, was an artillery expert who fought with J.E.B. Stuart and Stonewall Jackson. General Robert E. Lee referred to him as "the gallant Pelham." He was killed at age 24 at the Battle of Kelly's Ford.

5. Cornwall Furnace Park
Erected in 1862, cold blast furnace was first in county to be powered by water. Furnace supplied iron ore for foundries in Rome, GA, where armaments were forged for Confederate States of America.

2. Pope's Tavern Museum
The one-time stagecoach stop, tavern and inn was used as a hospital by Confederate and Union forces during the Civil War. The upstairs museum houses an extensive collection of Civil War artifacts.

4. The Old State Bank
Pre-Greek Revival structure is oldest bank in state. Used as hospital during Civil War, one of only 4 buildings left standing when war ended.

6. Dred Scott Home Site
Dred Scott, the plaintiff in the famous Scott v. Sanford case, was brought to Huntsville as a slave in 1818 and lived in Alabama for 12 years. In its now infamous decision, the U.S. Supreme Court ruled against Scott 7-2 in 1857, saying that no blacks, free or slave, could be citizens of the United States.

6. Historic Huntsville Depot
Climb on locomotives, examine Civil War graffiti, and listen as robotic ticket agents tell about working for railroad. Exciting hands-on programs available. Home of Rocket City BBQ Cook-Off and Whistle Stop Festival. The Huntsville Depot was used as a Union hospital, prison and as quarters for both black and white Union soldiers, who left graffiti on the third floor walls.

7. Stevenson Railroad Depot Museum
In 1861, Stevenson was a vital rail link to major points throughout the Southeast. Union General Rosecrans' forces constructed a pontoon bridge across the Tennessee River at Stevenson in 1863, allowing thousands of Union troops to cross the river and advance on the battlefield at Chickamauga.