Ask any visitor to Scottsboro about the reason for their trip and they’re likely to respond that it’s for the shopping experience at Unclaimed Baggage Center. And rightly so. This nationally acclaimed center draws visitors from around the world and has been featured on the "Today" show, CNN, "Oprah," Fox News, "Sunday Morning" on CBS, the "Late Show" with David Letterman and in The New York Times. But shopping is only part of the allure of this beautiful mountain town.

Located in the foothills of the Appalachian Mountains on 69,000-acre Lake Guntersville, Scottsboro is a treasure-trove of adventure. Here you can tour a quaint museum that chronicles the early history of the Civil Rights Movement in America, see the courthouse where the Scottsboro Boys Trials took place in the 1930s, and enjoy premier outdoor recreation, such as bird-watching, boating, camping, fishing and golfing. From nearby canyons and mountains, you’ll uncover trails perfect for hiking and biking, and venture along rocky bluffs and into caves located in the very same area that Davy Crockett explored in the late 1700s. To soak in the beauty of the area, be sure to plan visits to coincide with wildflower displays in the spring and the bold and brilliant colors of the leaves in the fall.

The history of Scottsboro and Jackson County is housed in a splendid Greek Revival mansion known as the Scottsboro-Jackson Heritage Center (208 S. Houston St.; 256-259-2122). As both a historical and a cultural museum, the center is dedicated to representing the rich history, customs, traditions and art of Jackson County. The center features three exhibit areas: the antebellum Brown-Proctor House, the pioneer village named “Sagetown” and the Little Courthouse. The center also offers a genealogical research library and hosts various art expositions and traveling exhibits throughout the year.

History records the Scottsboro Boys trials as the beginning of the modern Civil Rights Movement in America. The Supreme Court decision requiring a “jury of one’s peers” is considered one of the 10 most important jurisprudence decisions in American history. The trials and their aftermath served as inspirations for Harper Lee’s 1960 Pulitzer Prize-winning novel To Kill a Mockingbird.

One block from the little chapel that houses the Scottsboro Boys Museum is one of the nation’s premier shopping experiences. The Unclaimed Baggage Center (509 W. Willow St.; 256-259-1525), which has received recognition from across the country on television and in newspapers, offers to the public for purchase truckloads of lost luggage and cargo goods that can’t be traced to the owners.

Under contract to the airlines and cargo carriers, Unclaimed Baggage receives tons of lost and unclaimed passenger bags and cargo goods each week. They sort through them then display the merchandise for sale to the public at hugely discounted prices. More than 1 million items pass through the store annually. About 60 percent of the merchandise is clothing with the balance of the store dedicated to cameras, electronics, sporting goods, jewelry, designer glasses, books and, of course, luggage. The vast majority of items are from unclaimed baggage – goods that remain unclaimed after at least 90 days of intensive tracking by the airlines. Cargo and freight shipments that are also unclaimed have been added to the inventory and are available in designated areas of the store.

Some items the Unclaimed Baggage Center receives are just too valuable or intriguing to sell. So store operators opened a small museum to display these “lost treasures.” The museum features rotating displays that have included Egyptian artifacts estimated to date from 1567-304 B.C. and a violin from 1770, as well as other rare and unusual items. “Hoggle,” the gnome-like gatekeeper from the Jim Henson movie Labyrinth, has a permanent place in the display.

The on-site Cups Cafe (256-259-1525) inside Unclaimed Baggage Center is a great place to take a short break from shopping. The menu features Starbucks coffee, salads, sandwiches, barbecue and gourmet desserts. Make sure and try the famous homemade chicken salad. Directions: To get to Unclaimed Baggage Center from U.S. Highway. 72 in Scottsboro, exit on Veterans Drive (AL 35) and continue to Willow Street. Turn left. The store is approximately 1.2 miles from the traffic light, on the left side of the road.

An alternate suggestion for dining in Scottsboro is Carlile’s Restaurant (23730 John T. Reid Pkwy.; 256-574-5629). This family-owned eatery is known for its homemade sauces, seafood, steaks and barbecue. Both the chicken salad at Cups Cafe and the signature tomato pie at Carlile’s are featured in the “100 Dishes To Eat in Alabama Before You Die” brochure.

Experience the Downtown Square and Nearby Attractions

Five blocks from Unclaimed Baggage is Courthouse Square (102 E. Laurel St.) in downtown Scottsboro. Scottsboro is the county seat of Jackson County, and the square is one of the best landscaped in the state. In front of the Neo-Classical brick courthouse, constructed in 1911-1912, is a historic marker denoting where the first Scottsboro Boys Trials took place.

The front two-story portion is supported by four stone columns of the Doric order. A cupola on the top contains a Seth Thomas clock.

Enjoy Art Sunday in the Park

If you’re visiting Scottsboro in late summer, King Caldwell Park (1002 S. Broad St.) is a must-stop. The park is home to Art Sunday, an arts and crafts festival held the Sunday before Labor Day each year in conjunction with Scottsboro’s First Monday Trade Days (among the nation’s oldest). Many exhibitors and thousands of people attend the festival annually. Situated near downtown, right next to the library and across the street from the police department, the park is largely wooded with several nature trails running through it. It offers picnic tables, a pavilion with restrooms and a playground.

For outdoor enthusiasts, recreation reigns supreme on beautiful Lake Guntersville. This 69,000-acre lake is Alabama’s largest. It was created in 1938 when the Tennessee Valley Authority dammed portions of the Tennessee River to control flooding and provide low-cost hydroelectric power. Today, Lake Guntersville is nationally known for its largemouth bass and has been the site of the National Bassmaster Tournament. Skiing, boating and enjoying personal watercraft are great ways to spend a day on the water.

Located on the banks of Lake Guntersville is Goose Pond Colony (417 Ed Hembree Dr.; 256-912-0592). This public resort features two beautiful 18-hole championship golf courses, lakeside cottages, a main lodge, a waterfront campground and a full-service marina, along with a swimming pool, beach area and The Docks Restaurant. Dining at The Docks is an experience as it is the only fine dining restaurant in the area with lake access for any size boat.

The editors of Southern Living and Condé Nast Traveler magazines have both recognized The Lodge on Gorham’s Bluff as “Alabama’s Most Romantic Destination.”

Visitors to Scottsboro will also find a number of attractions within easy driving distance. Cathedral Caverns State Park (637 Cave Rd., Woodville; 256-728-8193) is only a 15-minute drive from Scottsboro. The first thing you notice when you get to Cathedral Caverns is the massive cave entrance. The huge opening measures 126 feet wide and 25 feet high. Inside the cavern, you will find Big Rock Canyon, Mystery River and beautiful rock formations, including a huge stalagmite column that reaches the ceiling of the cave some 45 feet above. You can visit anytime, as the cave maintains a comfortable 60-degree year-round temperature.

The Walls of Jericho, which has been called the “Grand Canyon of the South,” is about 25 miles northwest of Scottsboro off Highway 79. The area consists of 12,510 acres of mountainous and wooded terrain and includes springs, caves, rocky bluffs and portions of the headwaters of the Paint Rock River. The spot gets its name from a traveling minister in the late 1800s who was enthralled with the cathedral-like beauty of the place and decided it needed a biblical name. Visitors can travel to the bottom of the limestone gorge and look up at the 200-foot walls.

About 30 minutes northeast of Scottsboro is the Russell Cave National Monument (256-495-2672) in Bridgeport. This archaeological site was home to prehistoric man for more than 10,000 years and is the only national monument in Alabama. The clues gathered from Russell Cave give a glimpse into the lives of ancient North American inhabitants dating from 10,000 B.C. to A.D. 1650. 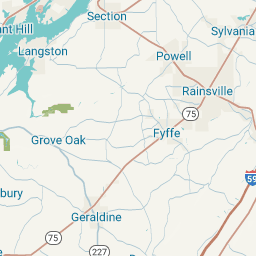 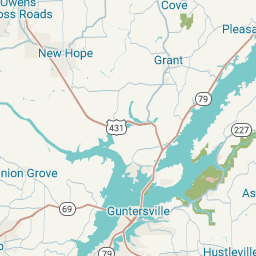 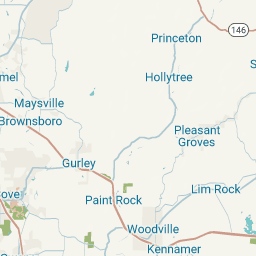 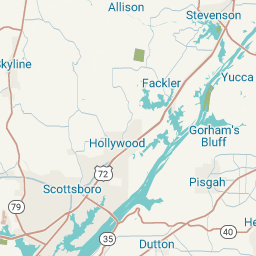 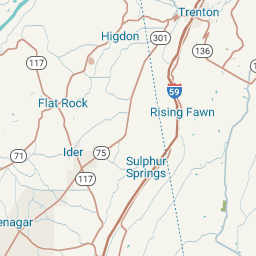 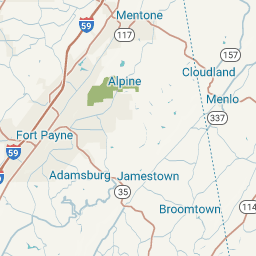 Scottsboro is the county seat of Jackson County and is named for its founder Robert Scott. It is located 30 miles each from the state boundaries of Georgia to the east and Tennessee to the north and about 45 miles from Huntsville to the west. Prior to Scottsboro's founding, the area surrounding the present-day city was inhabited by the Cherokee tribe. While the Tennessee Valley did not have large Native American settlements at the time of the first white settlers, there was a Cherokee town named “Crow Town” near where Scottsboro is located today.

The Lodge on Gorham’s Bluff

Scottsboro offers modest-priced lodging for those on a budget. For those who choose to throw the budget to the wind and truly enjoy themselves on a getaway weekend, however, there’s The Lodge on Gorham’s Bluff (101 Gorham Dr., Pisgah; 256-451-8439). This luxury retreat sits high atop Sand Mountain overlooking the Tennessee River Valley and is located about 30 minutes east of Scottsboro in the small town of Pisgah.

The property has been known as Gorham’s Bluff since Civil War veteran Billy Gorham settled here in 1885. The three-story Southern plantation-style inn has six suites with private balconies, and there are nine fully furnished cottages on the resort grounds. A half-mile trail leads down the bluff to the water’s edge.

In keeping with the resort’s romantic character, the suites are appointed with antiques and all the expected luxuries, including Egyptian cotton terry towels. The one thing you won’t find in the room is a television. However, there is a common area with a television so you don’t have to miss the big game during your stay.

The dining room at the lodge is a culinary destination. Each morning, guests can enjoy a large made-to-order breakfast. At midday Monday through Saturday, gourmet box lunches are available, and on Sunday a large sit-down supper is served. Dinner is an elegant candlelit, four-course meal. Along with accommodating lodge guests, the dining room takes reservations seven days a week from the general public.