The U.S. Space & Rocket Center (One Tranquility Base; 1-800-637-7223) in Huntsville is the largest and most comprehensive space flight museum in the world. Located just off I-565, the center is easy to spot from miles away by the 38-story replica of the Saturn V rocket standing in front of it. The space center's side parking lot is located alongside the futuristic dormitories used for Space Camp and an 89-ton mock-up of the Pathfinder space shuttle.

Walking up the sidewalk to the center, you will see both the grave of Miss Baker, a spider monkey launched into space and successfully recovered, and an SR-71 Blackbird spy plane on display. The SR-71 Blackbird planes were used by the U.S. Air Force from 1964 to 1998 as a strategic reconnaissance aircraft. They cruised at Mach 3 (three times the speed of sound) and set a jet speed record by traveling from New York to London in one hour and 54 minutes.

Once inside the space center, you can purchase a ticket and visit a gift shop full of NASA and science souvenirs, including flight suits, space craft models, and Apollo and shuttle program collectibles. It also has one of the best planetariums in the world. After three years of planning, the space and rocked center replaced its Space Dome IMAX theater with the INTUITIVE Planetarium, which now features a massive 8K screen and seats 250 people.

The U.S. Space & Rocket Center, created by the state of Alabama in 1970, has an extensive collection of original space exploration hardware, including Mercury and Gemini capsule trainers, the Apollo 16 capsule and one of the few V-2 rockets in the nation. You can also see the actual desk where Dr. Wernher von Braun worked as director of the Marshall Space Flight Center and his 1969 calendar where written by his hand in pencil on July 20 are the words: “lunar surface achieved.”

It is awe-inspiring to think of the progression that led man from the Quick plane to the Saturn V moon rocket in less than 70 years.

In addition to simulators and other attractions, the center offers hands-on exhibits:

Discover wonders of the Davidson Center

A short walk-through Rocket Park will lead you to the Davidson Center for Space Exploration, which was specially designed to house the original engineering model, the first Saturn V rocket. It was never launched into space. The rocket is suspended 10 feet above the floor, allowing visitors to walk underneath it. The Saturn V is a National Register of Historic Landmark and was named one of the Seven Wonders of America by “Good Morning America.”

There is a great photo opportunity when you enter the Davidson Center and climb the stairs to the main exhibit hall. The Quick monoplane that was invented by William Lafayette Quick and flown in 1908 in Hazel Green, Ala. is suspended from the ceiling. A photo taken of the Quick plane from the top of the staircase will also show the 38-story replica of the Saturn V rocket visible outside the window. It is awe-inspiring to think of the progression that led man from the Quick plane to the Saturn V moon rocket in less than 70 years.

Once in the main area of the Davidson Center, you will be overwhelmed by the awesome size of the Saturn V rocket as you walk directly underneath this engineering marvel. The Saturn V on display is one of only three remaining in the world. The rest of the 68,000 square-foot Davidson Center is filled with artifacts from the Apollo era, including an actual moon rock from the Apollo 12 mission, a lunar excursion module, lunar rover vehicle, a mobile quarantine facility, the Apollo 16 capsule and actual spacesuits worn by the astronauts. You can walk across the same metal access arm walkway that the astronauts used to enter their space capsules.

A special program offered at the rocket center is Space Camp. The idea for Space Camp came from Dr. von Braun in 1977 when he was touring the rocket center and noticed a group of children studying the exhibits and taking notes. Dr. von Braun said, “We have band camp, football, cheerleading; why don't we have a science camp?” Space Camp was founded in 1982 to provide residential and day camp educational programs for children and adults. Space Camp and Space Academy programs include the original simulated astronaut training camps conceived by Dr. von Braun and its sister program, Aviation Challenge, which offers simulated jet pilot training.

The movie “Space Camp,” featuring Joaquin Phoenix, Kate Capshaw, Lea Thompson and Kelly Preston, was shot at Huntsville’s Space Camp in the mid-‘80s. and in 2012, Space Camp was featured in the Hallmark Hall of Fame movie “A Smile as Big as the Moon” on ABC television. The movie was based on a true story about a special education teacher’s dream of helping his students attend Space Camp.

Other Space Fun in Huntsville

Drive to the top of Huntsville's Monte Sano to see the Von Braun Astronomical Society's Planetarium and Observatory (5105 Nolen Ave.; 256-539-0316) located inside Monte Sano State Park, just past the park office. Dr. Wernher von Braun and his colleagues used the observatory's telescope to search for possible landing sites for the Apollo program. The planetarium offers programs to the public every Saturday night starting at 7:30.

Whether you're looking for a hotel, an RV camping spot or a cozy and quiet bed and breakfast, Huntsville offers nearly 6,200 rooms to choose from. You can share a view of the Saturn V rocket or be close to the hottest shopping and dining spots. For a list of lodging and dining options in the area, visit www.huntsville.org. 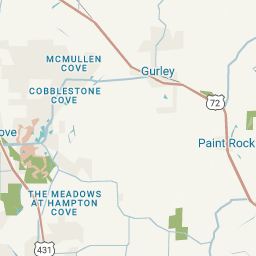 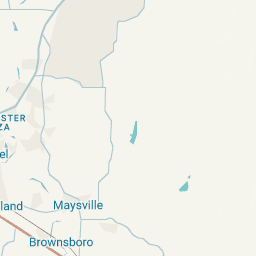 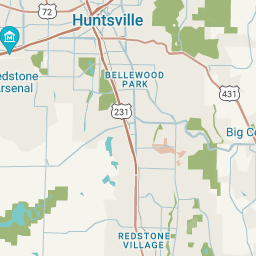 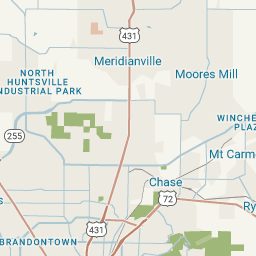 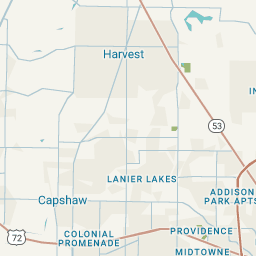 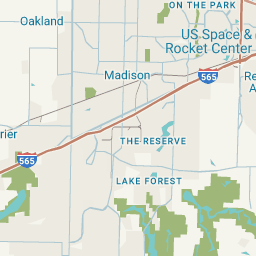 The three facilities were combined to form one large site called Redstone Arsenal at the end of World War II. The Redstone Arsenal site was selected for the Army's rocket and missile development program, and 1,000 personnel were transferred there in 1950. Central to this group was Dr. Wernher von Braun and his team of German rocket scientists who had been brought to the U.S. from Germany after the war.

They were given the mission to develop what became known as the Redstone Rocket based on their wartime V-2 rocket technology. The Redstone Rocket was used to launch America's first satellite, Explorer I, in 1958 and America's first man, Alan Shepard, in 1961. The massive Saturn V rocket that took man to the moon during the Apollo program was developed in Huntsville by the von Braun team during the mid-1960s.

Huntsville is located just south of the Tennessee / Alabama state line along I-65.

Be sure to experience Space Shot, where you can rocket 140 feet straight up in 2.5 seconds with 4 G's of force and experience 2-3 seconds of weightlessness followed by a 1 G free fall, and other space travel simulations while at the Space and Rocket Center. 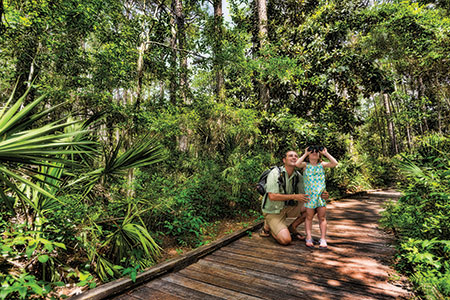 Alabama's Gulf Coast is a stopover point for birds as they return from Central to North America in the spring, so it's the perfect place to see herons, seagulls, pelicans and more.