If you’re looking for the warmest hospitality and a unique collection of Italianate architecture, head to Eufaula. The southeastern Alabama town on the west bank of the Chattahoochee River is one of the most picturesque and historic in the South. It’s no wonder that Eufaula boasts the state’s oldest and largest tour of homes, the Eufaula Pilgrimage, each spring. The pilgrimage features some of the South’s grandest structures in the Seth Lore-Irwinton Historic District.

You’ll know you have arrived in Eufaula when you drive down beautiful Eufaula Avenue. This street is perhaps as pretty as any street anywhere.

You’ll know you have arrived in Eufaula when you drive down beautiful Eufaula Avenue. This street is perhaps as pretty as any street anywhere. Lined with dogwoods and magnolias, it is flanked by gracious antebellum mansions that “rise like ornate wedding cakes,” as described by Lee Sentell, author of "The Best of Alabama."

During your nostalgic return to the Old South, you are invited to step inside grand structures built by 19th-century planters and merchants that still house period heirlooms and family treasures. Sit and enjoy an afternoon tea on the front porch of one of the grand mansions in the Seth Lore-Irwinton Historic District. At an old cemetery, listen to stories about Eufaula’s former residents as told by local tour guides. And explore treasures of the past at the Eufaula Pilgrimage Antique Show.

Most of the homes on tour are private residences, open only during the annual Pilgrimage. As you stroll from Greek Revival cottages to Italianate showplaces, enjoying tours by daylight and candlelight, you’ll find yourself spellbound by Eufaula’s colorful trail of floral beauty and the warm hospitality of the people you meet along the way.

Where To Begin: Shorter Mansion

Begin your Pilgrimage experience at Shorter Mansion (340 N. Eufaula Ave.; 334-687-3793). By far one of Eufaula’s finest homes, this 1906 Classical Revival-style house museum serves as the town’s welcome center and is headquarters for the annual tour of homes weekend.

Shorter Mansion, located in the Seth Lore Historic District, is graced with bold Corinthian columns that support an entablature extending around three sides of the structure. It was originally built in 1884 by Eli Sims Shorter II, a wealthy cotton planter, and his wife, a Georgia-born heiress to the SSS Tonic fortune. When the mansion was put up for auction by the builder’s granddaughter in 1965, it was purchased by a group of civic-minded citizens who organized the Eufaula Heritage Association. They held the first pilgrimage in 1966. Now, decades later, the Pilgrimage continues to be the No. 1 drawing card for Eufaula each spring.

Tickets, maps and brochures about the Pilgrimage can be purchased in advance at Shorter Mansion or at a designated location during the event. They can also be purchased online.

The Seth Lore-Irwinton Historic District, the largest historic district in east Alabama and one of the largest in the state, encompasses much of the oldest part of Eufaula. In 1834, Capt. Seth Lore and others founded what is today known as the downtown area. They named the four main avenues Livingston, Orange, Randolph and Eufaula. The first letter of each avenue together spelled the captain's last name. Many of the historic homes and buildings in the district can be found along these streets. In addition to Shorter Mansion, where scenes from the movie “Sweet Home Alabama” were filmed, the district – listed in the National Registry of Historic Places – showcases more than 700 significant sites, including an extensive collection of domestic Italianate architecture and other homes and churches built between 1834 and 1915.

Maps for self-guided walking or driving tours of the district, as well as information on other attractions in the county, are available at the Eufaula Chamber of Commerce (333 E. Broad St.; 334-687-6664). The chamber is located in the James S. Clark Center, which was built in 1892 as a Central of Georgia freight train depot.

Fendall Hall (917 Barbour St.; 334-687-8469), also located in the Seth Lore-Irwinton Historic District, is a state-owned house museum and one of Alabama’s outstanding Italianate houses. Crowned by a cupola and aptly nicknamed the “groom’s cake” because of its Victorian chocolate-and-tan color scheme, the heavily detailed house was completed in 1860 by Edward and Anna Young and was home to five generations of the Young family. Among its many treasures are family and period furnishings, marble mantles, and a black and white marble tiled entry. In 1973, it was purchased by the Alabama Historical Commission and later restored for preservation as a house museum.

The Hart House (211 N. Eufaula Ave.; 334-687-9755), built by John Hart around 1850, is recognized as an outstanding example of pure Greek Revival architecture. It features Doric columns, an entablature with dentils, and a center doorway with sidelights and transom. It was purchased by the Historic Chattahoochee Commission in 1985 for use as its headquarters.

Following a preplanned driving route, you can see many other structures and sites that are part of the Seth Lore-Irwinton Historic District, including Shorter Cemetery where Alabama Gov. John Gill Shorter and his family are buried, the 1869 First Presbyterian Church, featuring a gothic vaulted ceiling made of brick from Holland and fashioned after English parish churches, and historic Fairview Cemetery, where many of Eufaula’s black citizens were interred until 1870. In addition to the "Old Negro Cemetery," there are at least five other graveyards, including the Jewish, Presbyterian, Masonic, Odd Fellows and Public sites, which are part of present-day Fairview Cemetery. During the Pilgrimage weekend, live performances of Tales from the Tomb take place here.

From “Wedding Cake” Houses to Antiques

In addition to the homes tour, you can also enjoy the Eufaula Athenaeum Tour of a private collection featuring items of historic significance to Barbour County and relics associated with the American Revolution, early presidents and founding fathers; Civil War reenactments; Civil War period music; professional and children’s art exhibits; garden tours; and carriage rides, as well as the annual antique show and sale. Held at the Eufaula Chamber of Commerce, the Eufaula Pilgrimage Antique Show (333 E. Broad St.; 334-687-6664) is one of the most prestigious in the Southeast. Dealers offer linens, silver, china, furniture, glassware and collectibles for show and sale throughout the weekend.

If you are worried about what to eat while visiting Eufaula, don’t. Throughout the weekend, you can experience everything from sitting on the porch of a historic home enjoying snacks and good conversation with homeowners and feasting on buffet lunches provided by the local country club to enjoying appetizers and desserts during an afternoon tea. Of course, there are also several local eateries for you to enjoy.

Eufaula offers several chain hotels for overnight lodging and one bed and breakfast facility. A recommended choice for both lodging and dining is Lakepoint Resort State Park (104 Lakepoint Dr.; 334-687-8011). This picturesque 1,220-acre park provides a great place for photographing a wild heron at sunset, watching the sun rise over Lake Eufaula from your hotel room or cottage or enjoying the many activities that include fishing, camping, golfing, swimming, bird watching, and walking or biking along scenic trails.

If you need to fill up before heading out of town, be sure and stop at the Peddler 5 Food Store, known locally as the Gator Stop (1955 N. Eufaula Ave.; 334-616-0879). Located less than a mile from Lakepoint Resort, the Gator Stop provides a unique setting for watching alligators sunbathe, especially in the spring and summer months.

The Gator Stop provides a great picture-taking moment for the daring, but please don’t attempt to feed the gators and remember to keep an eye on children and pets at all times.

In nearby Clayton (about 20 miles away), you will find Alabama’s only remaining eight-sided antebellum house. The two-story structure, featuring a flat roof with a cupola, served as Union Cavalry Cmder. Benjamin H. Grierson’s headquarters in April 1865. While visiting Clayton, be sure to stroll through the historic Clayton Cemetery. Among the many gravestones you’ll find here is one that’s shaped like a whiskey bottle. It marks the gravesite of W.T. Mullen, who “drank himself to death.” According to his wife, who commissioned this unique headstone, Mullen died in 1863 at the age of 29. 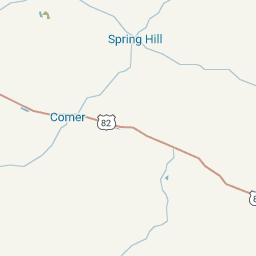 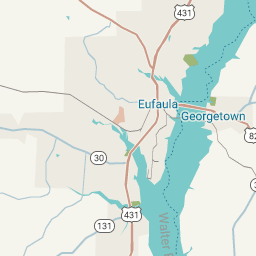 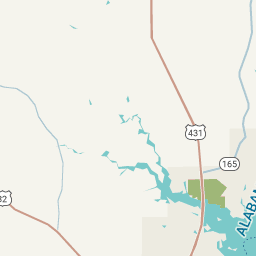 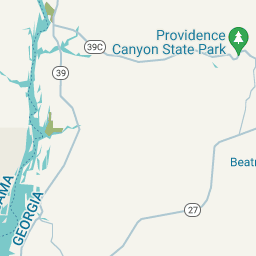 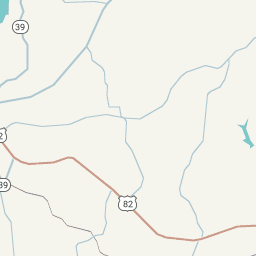 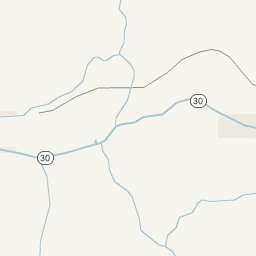 Situated high upon a bluff overlooking scenic Lake Eufaula on the west bank of the Chattahoochee River, Eufaula has an intriguing past dating as far back as 1733, when it was occupied by Creek tribes of the Muscogee Nation.

It was settled in 1823 as Irwinton. In 1843, the town was renamed Eufaula in honor of its Creek heritage and because the postman kept misdirecting mail to the Georgia town of Irwinton. Incorporated in 1857, Eufaula prospered as a river town serving first as a port for cotton distribution and a business hub for Alabama and Georgia in the 1800s then as an agricultural stronghold for supplying cotton to textile mills in the 1900s.

For a breathtaking view of the town, plan your visit in late March and early April to coincide with the annual Eufaula Pilgrimage (334-687-3793). This is when colorful red and pink azaleas blanket the area and Southern belles in hoop skirts and white bonnets turn out to welcome you and hundreds of other visitors to their historic hometown. 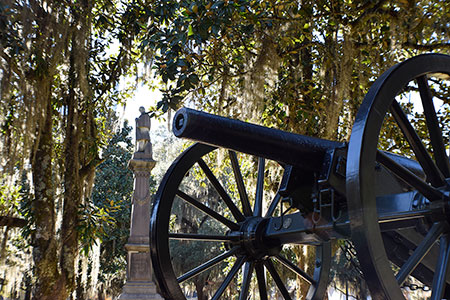