It’s possible to keep everyone happy. All it takes is a little Magic City. The largest city in Alabama is, unsurprisingly, not short on things to do. Eat at James Beard Award-winning restaurants, catch your favorite artist at the world-famous Alabama Theater, explore the world of science and discovery at the McWane Science Center or use Birmingham’s central location as a hub to reach Alabama’s other great spots. 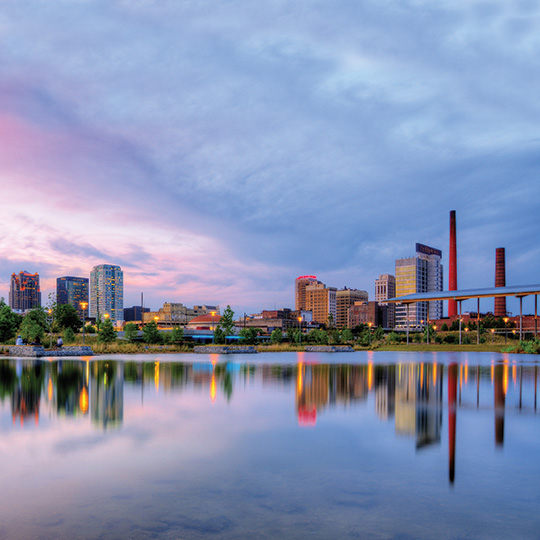 Hampton Inn and Suites Birmingham/280 East-Eagle Point, Alabama offers a convenient location behind The Village at Lee Branch, an outdoor shopping promenade and Eagle Point Golf Course. Our hotel is a short walk away from many of the area’s restauran...

Book a room at the Comfort Inn hotel in Homewood, AL.

Salute to all Alabama veterans killed in all wars from 20th and 21st century to present. All U.S. veterans honored in Flag Plaza with purchase of Step Stone marker.

Conveniently located along I-65, this location provides amenities for training and conferences.

Laura Levie is a Birmingham-based artist who has been painting for more than 30 years. In her watercolor illustrations, she likes to tell stories, using animals, nostalgic objects and nature to impart the joyful, reflective and transcendent moments i...

That tantalizing aroma wafting down historic Morris Avenue comes from peanuts toasting in antique roasters at the Peanut Depot. This is a must-see stop for visitors, if only to admire the magnificent old machinery while the children feed pigeons.
Previous SlideNext Slide

Jinsei is a modern, upscale Japanese Sushi bar located in the heart of downtown Homewood.

The Grill at Iron City

At Fleming’s, every visit is filled with indulgent possibilities. Experience our passion for steak and wine, served with inspired hospitality.

The original location in Tuscaloosa, a homegrown joint with a worldly following, still packs in hungry diners. Back in the 1960s and 1970s, Dreamland developed devoted fans who would travel across the nation to eat at this storied spot.

Tucked away in Pickwick Place with an amazing view of the beautiful Highland’s Methodist Church, we are hoping to contribute to the revitalization of the historic 5 Points Southside neighborhood and the booming Birmingham restaurant scene. We pri...

Located at Five Points South, Chez Fonfon is a casual drop-in place like the familiar corner cafes in Paris, Lyons or Bandol.

The Pizitz is a classic building that embodies the very best of what downtown Birmingham once was and is again.

Nestled at the foothills of the Appalachian Mountains at the cross-section of two major railroads, the city was once the primary industrial center of the southern United States. At the height of the nation’s manufacturing age, the city grew so fast in population, it was called the “Magic City.” Today, Birmingham has transformed itself into a medical research, banking and service-based economy, making it one of the nation’s most livable cities with a vibrant downtown, a burgeoning loft community, a world-class culinary scene and more green space per capita than any other city in the nation!
Everyone finds something to love in Birmingham.

How to Get There

Birmingham serves as the major hub of travel for the state. The Birmingham-Shuttlesworth International Airport is home to six airlines, servicing over 100 daily flights to 17 cities throughout the United States.

Greyhound offers daily bus service, including holidays, to and from Birmingham. The station is near downtown's Linn Park and you will need to arrange transportation to your destination from the station. Hours of operation are subject to change. Call to verify information before making travel plans.

Space One Eleven Presents: In Case of Emergency, Break Glass